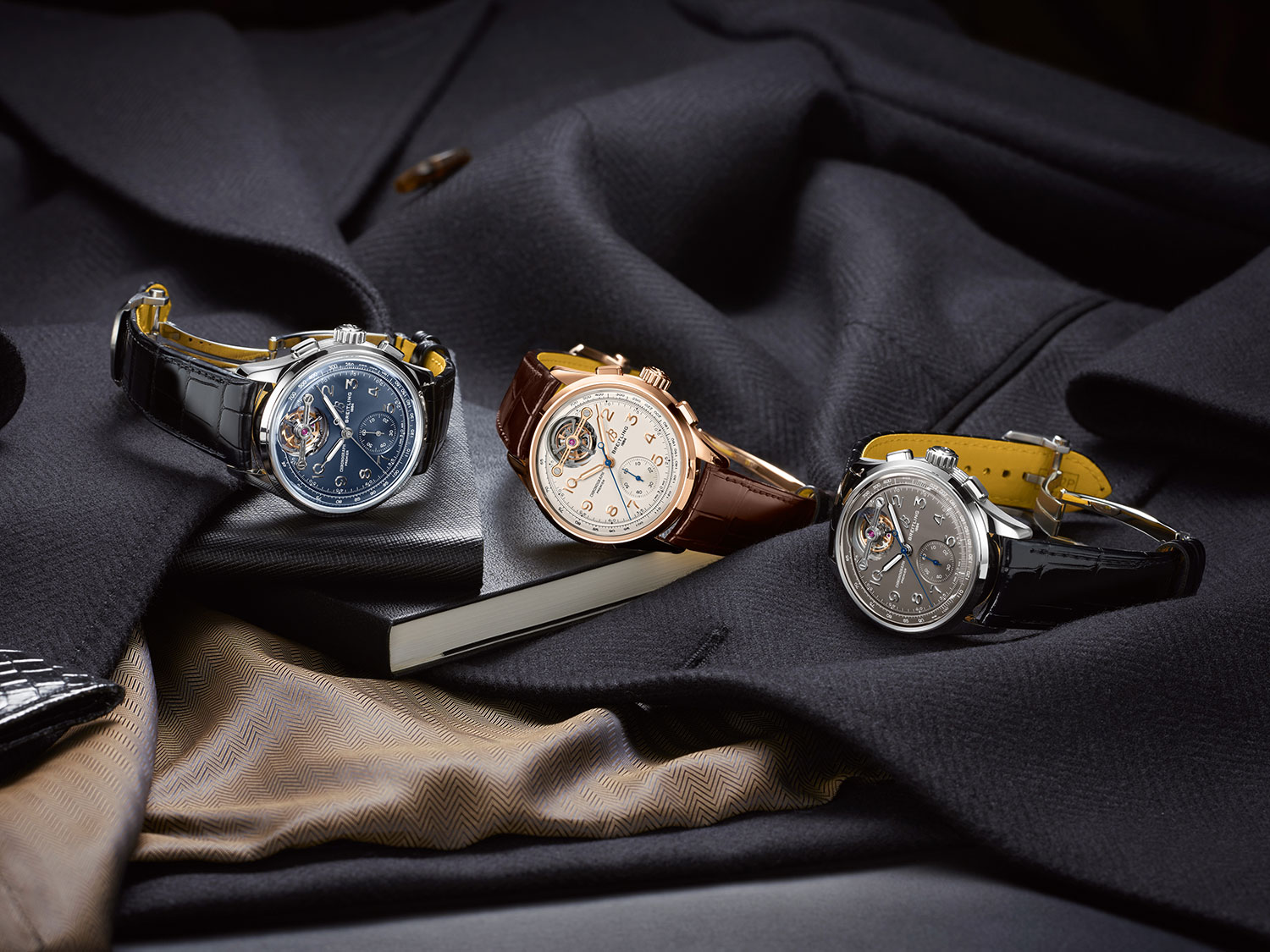 Breitling unveils a trio of ultra-premium chronographs, featuring solid precious metals and an exceptional tourbillon. Each of the three watch variations is inspired by one of the Breitling founders.

Conceived while the world was still in the grip of the Second World War, the Premier collection was Willy Breitling’s antidote to austerity. It was a time when wristwatches were professional tools used by pilots, navigators and engineers. And no one understood that better than Willy, whose business was renowned for its high-precision chronographs. But as a man of great personal style, Willy also sought to elevate the wristwatch to a thing of elegance that, like the glamorous black-and-white films of the day, conveyed optimism in spite of the turbulent times. His Premier line, launched in 1943, maintained all the functions of his superb chronographs but enriched them with form.

Now the luxury Swiss watchmaker demonstrates that spirit once again with the launch of the Premier B21 Chronograph Tourbillon 42. As challenging to execute as it is beautiful, a tourbillon complication is the centrepiece of a new trio of exceptional wristwatches.   “The Premier B21 Chronograph Tourbillon 42 is the perfect expression of Breitling’s design and expertise,” says CEO Georges Kern. “In the tourbillon, you see the mechanism living at every second. It is the beating heart of the watch.”

A tourbillon houses the balance wheel, balance spring and escapement in a rotating cage, setting the entire assembly in perpetual motion. This action corrects for – and effectively cancels – the pull of gravity, which affects a watch’s accuracy differently in different positions. Breitling worked hand-in-hand with the speciality movement maker Manufacture La Joux-Perret to develop the B21 movement that takes the uncommon step of combining a tourbillon with a chronograph to make this trio of watches so distinctly Breitling.  Precious metals and a domed open caseback characterize the Premier B21 Chronograph Tourbillon 42. It comes in three variations, each named for one of the Breitling founding fathers. The Léon Breitling features a solid 18k red gold case with a silver dial and brown, semi-shiny alligator strap. The Gaston Breitling pairs a solid 18k white gold case with an anthracite dial and black alligator strap. The Willy Breitling, meanwhile, is a vision in solid platinum with an admiral blue dial and black alligator strap. Each watch features stylised square pushers and Arabic numerals that are hallmarks of the Premier line. Their symmetrical dial design, harmonious interplay of numerals and tone-on-tone colourways perfectly balance the undisputed star of the show – the tourbillon – that takes centre stage at 12 o’clock. The open sapphire crystal caseback is domed to allow for full appreciation of the B21 movement, where the oscillating weight and reverse side of the tourbillon appear in contrasting 18 k gold.

RETURN OF THE FOUNDERS SQUAD

The release of the Premier B21 Chronograph Tourbillon 42 marks the return of the Founders Squad, made up of Léon, Gaston and Willy Breitling, who come to life in the Premier Tourbillon’s new campaign. The three generations left their legacy on the brand and their imprint can still be felt in every aspect of these watches. Léon is the craftsman, whose work set a new standard for precision. Gaston is the innovator, whose design became what we know as the modern chronograph. And Willy is the man with impeccable taste, who ushered the wristwatch from purpose to style. The Premier B21 Chronograph Tourbillon 42 is for people who love the mechanics – and magic – of watchmaking. Combining the height of Breitling’s savoir-faire, innovation and style, this timepiece trio dedicated to our founders is one that would have made them proud.