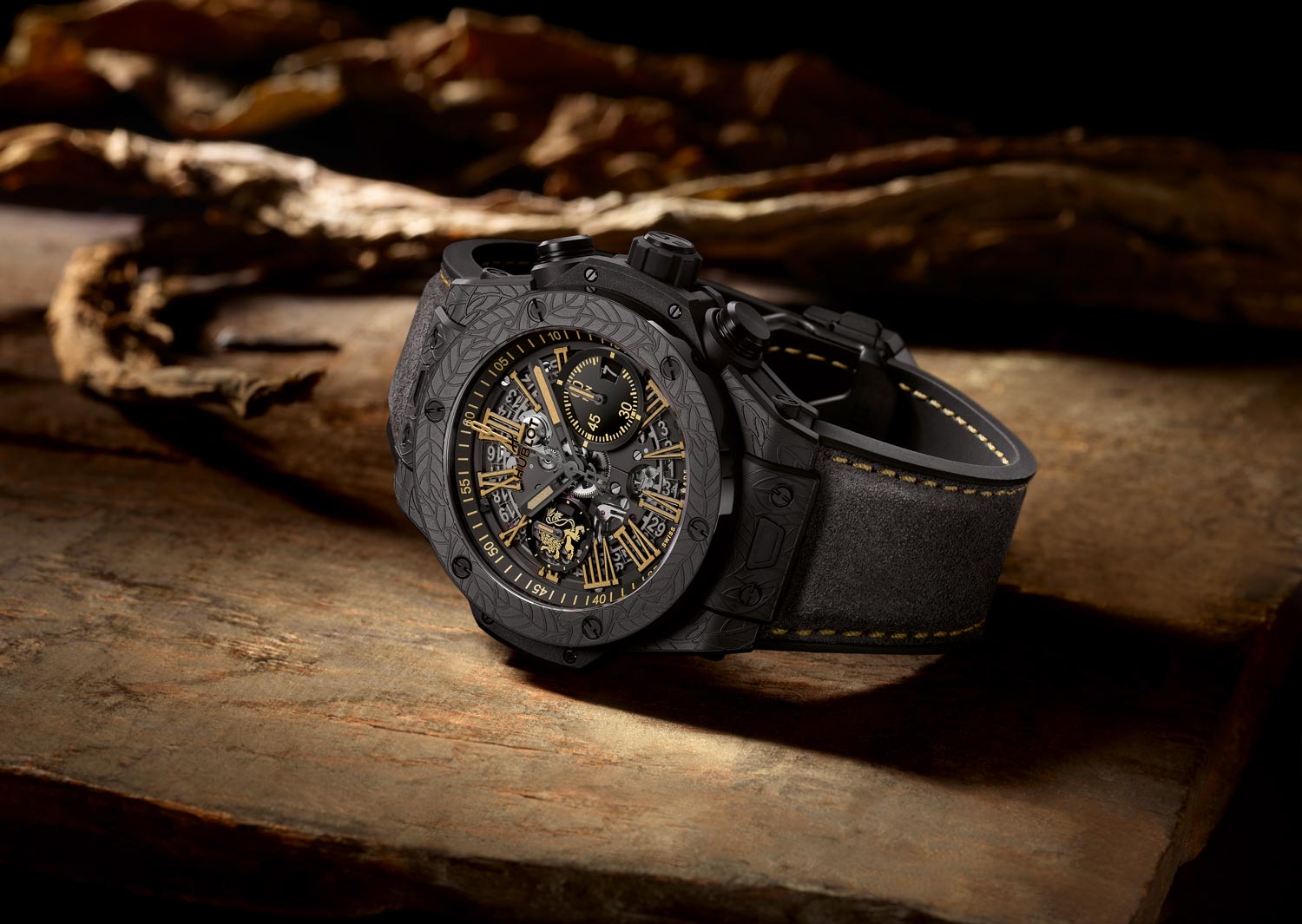 Hublot and cigar brand Arturo Fuente y Compañia have once again joined forces to present the Big Bang Unico Arturo Fuente Ceramic watch, in tribute to Carlos A. Fuente Sr., a giant in the cigar industry, a trendsetter, and father and patriarch of the Fuente family.

Arturo Fuente cigars are consistently rated among the best cigars in the world. It wastherefore natural that – brought together by our common desire to push the boundaries ofexcellence, each in our own field – our two companies joined forces and have been partnerssince 2012. It is in this same spirit that we are taking this opportunity to pay tribute to thepatriarch Don Carlos Sr.”

The Fuente family and I are very touched to have been able to pay tribute to Don Carlos with this extraordinary timepiece. Each of the patterns which it features reflect something of my grandfather’s epic story and his vision, and pay tribute to the values shared by the Fuente cigar company and the Hublot Manufacture.”

El Maestro! Carlos A. Fuente Sr. was born in 1935 in Ybor City, a Cuban émigré neighbourhood in Tampa, Florida. While still in primary school, Carlos Sr. began working in his father Arturo’s small cigar business. Even as very young children, part of the household duties was to first make 50 cigars a day before they could start their homework. Impassioned by his family and the craftsmanship of making cigars, Carlos Sr. worked alongside his father Arturo until his father’s retirement.

Taking over the reins of the family business in 1956, Carlos Sr. was ambitious and sought to expand the business, first in other parts of Florida before setting his sights on New York City. Carlos Sr. successfully enabled the company to flourish in the 1960s. Unfortunately, the United States embargo against Cuba forced the Fuentes to move their cigar production to Nicaragua. However, the family suffered further misfortune when, in 1978, their factory was burned down by Sandinista revolutionaries. Once again, the Fuentes were forced into exile and moved their operations to Honduras. And the adage that ‘things always seem to go in threes’ came true when, in 1980, the new factory also burned down.

“You have a choice: give up or fight on. The first is not an option.” Despite this run of bad luck, Don Carlos did not give up the fight, and he opened a new factory in the Dominican Republic. Since then, Arturo Fuente cigars have become one of the most highly renowned and most sought-after brands in the world.

The Big Bang Unico Arturo Fuente Ceramic watch pays tribute to the remarkable saga of Carlos A. Fuente Sr. His vast knowledge of his field, along with his dedication and his vision for his brand, made him a shining light to those who knew him and a reference for the cigar industry. With the help of Manny Iriarte, the Fuente family’s designer, the teams at Hublot have infused the iconic Big Bang with all the codes which are so dear to the Dominican cigar company. This starts with its 44-mm diameter case, whose black engraved ceramic picks up the pattern of the tobacco leaf, dancing to the rhythm of the mountain breeze, which is one of the key elements for the Fuente family. The case houses the famous UNICO calibre HUB1242 manufacture movement, a flyback chronograph offering a 72-hour power reserve.

The Roman numerals favoured by the Fuente add a remarkable note of authenticity to the timepiece. These numerals are taken from the clock which has historically appeared on the family crest. This is in reference to the Fuente motto: “We will never rush the hands of time.” Another emblem, that of a crowned lion, appears at 9 o’clock in recognition that the brand supplied cigars to the Spanish court and in honour of its great patriarch.

The back of the watch is engraved with “Big Bang Limited Edition” along with the number of the piece in the limited edition run of 100 pieces. Fuente’s historic logo appears in the centre, and its current initials “AF” (for Arturo Fuente) have here been replaced with “CF”, in reference to Carlos Fuente Sr., along with the words “Edición de homenaje” (which is Spanish for “edition in homage”). In quotation marks, the dedication by Carlito Fuente Jr. reads: “Our Father, Our Friend, Our Hero.”

Available in a limited edition of 100 pieces, the Big Bang Unico Arturo Fuente Ceramic comes in a spectacular lacquered wooden gift box which serves as a presentation case for the watch as well as a cigar humidor.