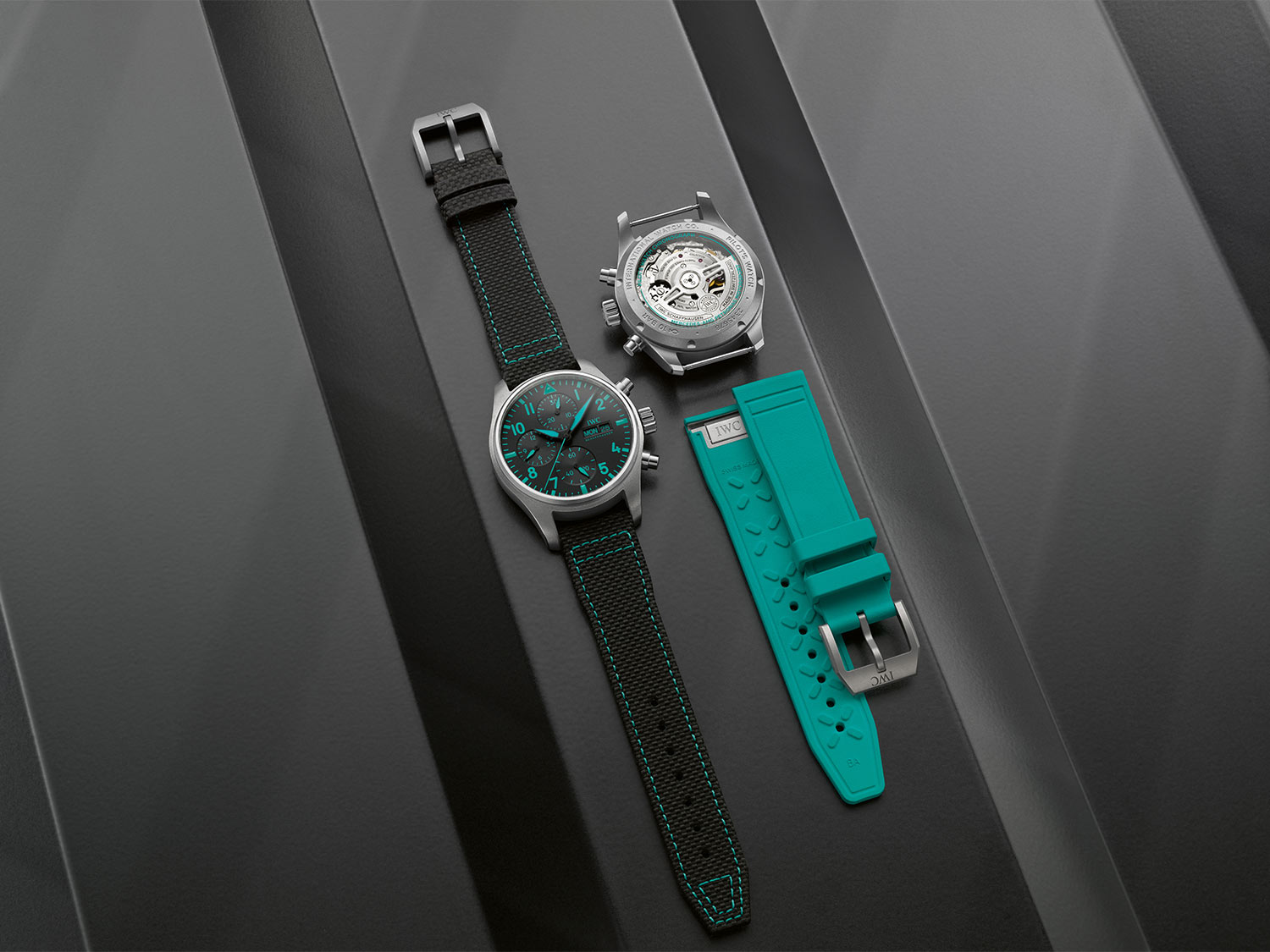 On the occasion of the inaugural Miami Grand Prix™, IWC Schaffhausen and the Mercedes-AMG Petronas Formula One™ Team unveiled the first official team watch. Crafted from lightweight and durable grade 5 titanium, the Pilot’s Watch Chronograph 41 Edition “Mercedes-AMG Petronas Formula One™ Team” features a black dial with printing and luminescence in the team’s signature Petronas green colour. Powered by the IWC-manufactured 69385 calibre movement, the chronograph comes with two straps in calfskin and rubber that can be exchanged quickly and easily thanks to the integrated EasX-CHANGE® system. The team watch is available for purchase exclusively online on iwc.com.

IWC Schaffhausen has been the official engineering partner of the Mercedes-AMG Petronas Formula One™ Team since 2013. As the elite of motorsport gathers in Florida for the inaugural Miami Grand Prix™, IWC CEO Chris Grainger-Herr and Mercedes-AMG Petronas F1™ Team Principal & CEO Toto Wolff announced the result of their most recent collaboration: for the first time in their longstanding partnership, IWC has developed an official watch for the team. This watch will be worn by the team, including designers, aerodynamicists, race engineers, strategists and mechanics. “Both fine watchmaking and racing are all about precision, craftsmanship and performance engineering. But it’s the human factor – the passion the love and the dedication that make all the difference between good and great. This notion perfectly describes our long-standing partnership with the Mercedes-AMG Petronas Formula One™ team and we are celebrating this partnership with the launch of the new team watch in Miami,” explained Chris Grainger-Herr, CEO of IWC Schaffhausen. Toto Wolff, Team Principal & CEO of the Mercedes-AMG Petronas Formula One™ Team added: “We’re delighted to unveil the first official team watch we’ve developed with IWC. It underscores the spirit of unity and the sense of belonging within our team and is a testament to the relationship we have built with IWC over the last decade. I am looking forward to seeing the watch being worn by members of the team trackside in Miami this weekend.”

The Pilot’s Watch Chronograph 41 Edition “MercedesAMG Petronas Formula One™ Team” (Ref. IW388108) is crafted from lightweight and remarkably rigid grade 5 titanium. Offering the highest strength-to-density ratio of any metal, titanium is also widely used in automotive engineering to produce car parts subject to immense stresses, such as engine valves. In addition, titanium is also highly corrosion-resistant. After machining and sandblasting, the surface retains an attractive greyish shimmer. A black dial with printing and luminescence in the team’s signature shade of green complement the distinctive design. The IWC-manufactured 69385 calibre, a chronograph movement in classic column-wheel design consisting of 231 individual parts, is visible through a sapphire glass back. The bi-directional pawl winding system builds up a power reserve of 46 hours.

The chronograph is delivered with two different straps: one black embossed calfskin strap, and one green rubber strap. Thanks to the integrated EasX-CHANGE® system, the straps can be exchanged quickly and easily at the touch of a button without additional tools. The different strap options and easy interchangeability make the Pilot’s Watch Chronograph 41 Edition “Mercedes-AMG Petronas Formula One™ Team” a fully versatile sports watch.

With eight championships won between the 2014 and 2021 seasons, the Mercedes-AMG Petronas Formula  One™ team holds the record for the most consecutive constructors’ titles. No other team in the elite class of motorsport has won as many consecutive team titles. During those title-winning seasons, the team has scored 111 wins, 232 podium finishes, 118 pole positions, 81  fastest laps and 53 one-two finishes from 160 race starts. Behind these accomplishments is a team of more than 900  professionals, including several hundred highly qualified engineers. In the team’s technology centres in Brackley and Brixworth, northwest of London, they design, develop, manufacture, assemble, and operate the championship-winning cars piloted by Lewis Hamilton and George Russell on the racing circuits worldwide. To celebrate this new endeavour, both team cars will be proudly featuring the IWC logo on the halo of the W13 race car for the Miami Grand Prix™.

Mercedes-AMG Petronas Formula One™ Team is the works team of Mercedes-Benz, competing at the pinnacle of motorsport – the FIA Formula One™ World Championship. Formula One™ is like nothing else in the sporting sphere. It’s a demanding technical and human challenge, combining cutting-edge technologies and innovation, high-performance management and elite teamwork. At Mercedes-AMG Petronas Formula One™ Team, a group of passionate and determined people work to design, develop, manufacture and race the cars driven by seven-time World Champion Lewis Hamilton and young star George Russell. The team has set a new benchmark for F1™ success during the sport’s current Hybrid era, winning consecutive Drivers’ and Constructors’ World Championships in 2014, 2015, 2016, 2017, 2018, 2019 and 2020, and the Constructors’ Championship in 2021. During those title-winning seasons, the team has scored 111 wins, 232 podium finishes, 118 pole positions, 81 fastest laps and 53 one-two finishes from 160 race starts.

The Pilot’s Watch Chronograph 41 Edition “Mercedes-AMG Petronas Formula One™ Team” is available exclusively online on IWC.com. In addition, the timepiece is eligible for registration under the My IWC care program and can benefit from a 6-year extension to the standard 2-year International Limited Warranty.