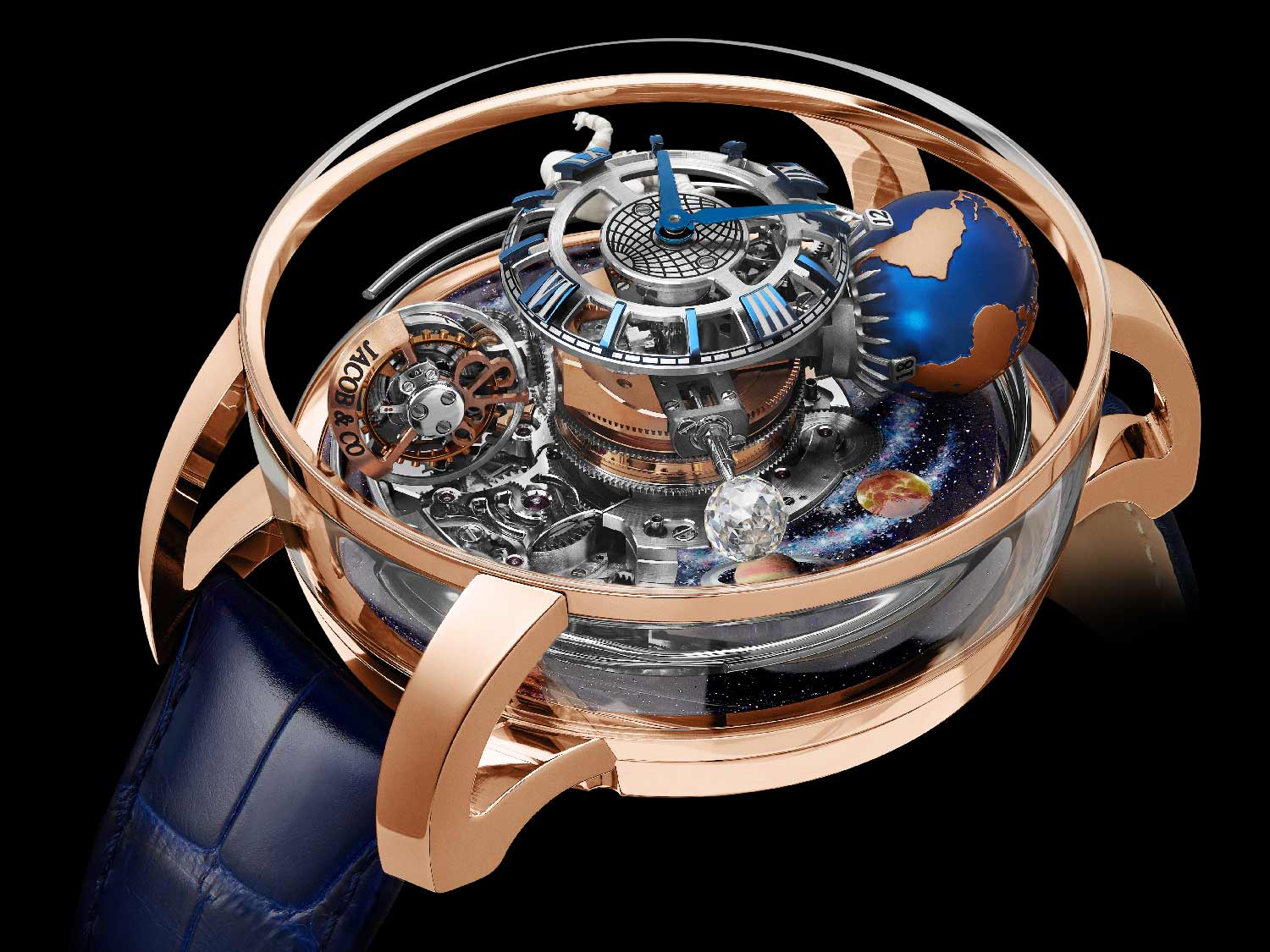 At its center, as with all versions of the Astronomia, is the unprecedented Astronomia movement with its vertical construction and four perfectly balanced arms, each attached to a novel rotating satellite. The time display has been moved from being one of the four satellites to the center of the movement. The movement platform rotates every 10 minutes inside the 50mm 18k rose gold and sapphire crystal case while floating above an aventurine base with a hand-painted depiction of the Milky Way galaxy with planets.

This is the second Maestro timepiece by Jacob & Co. The original introduced a Carillon Minute Repeater. As a first in watchmaking, the three gongs of the repeater are fully visible as they

crisscross above the base of the watch with the Milky Way painting. The Maestro Worldtime contains this same groundbreaking chiming complication. Activated on demand, the sound is clear and loud, the chimes are accurate and painstakingly calibrated.

This new Maestro also introduces a Worldtime function. It appears as an oversized globe of the earth extended from one of the arms of the Astronomia movement. This globe rotates on an axis every 24 hours, providing an accurate time among time zones throughout the world, while rotating with the platform every 10 minutes inside the dial.

The three remaining satellites of the Astronomia Worldtime are:

Providing the power for the rotating platform and satellites, the energy-draining Carillon Minute Repeater, and the time function is the manufacture JCFM11A caliber, comprising 535

components. Despite driving all these complications, it still manages to have a 50-hour power reserve, making it a true haute horlogerie Maestro.

Jacob & Co. introduced the celestial-themed Astronomia Tourbillon in 2014 with its groundbreaking exposed four-arm vertical movement. On each arm is a novel satellite that features either a mechanical or artistic innovation that performs its own rotation while the entire platform rotates around a central gear, creating a constantly moving celestial scene. This unprecedented concept and mechanical construction have proven to be an outstanding multidisciplinary engineering accomplishment. It has also proven to be quite versatile as more than 90 iterations of the Astronomia have been created over the following years.