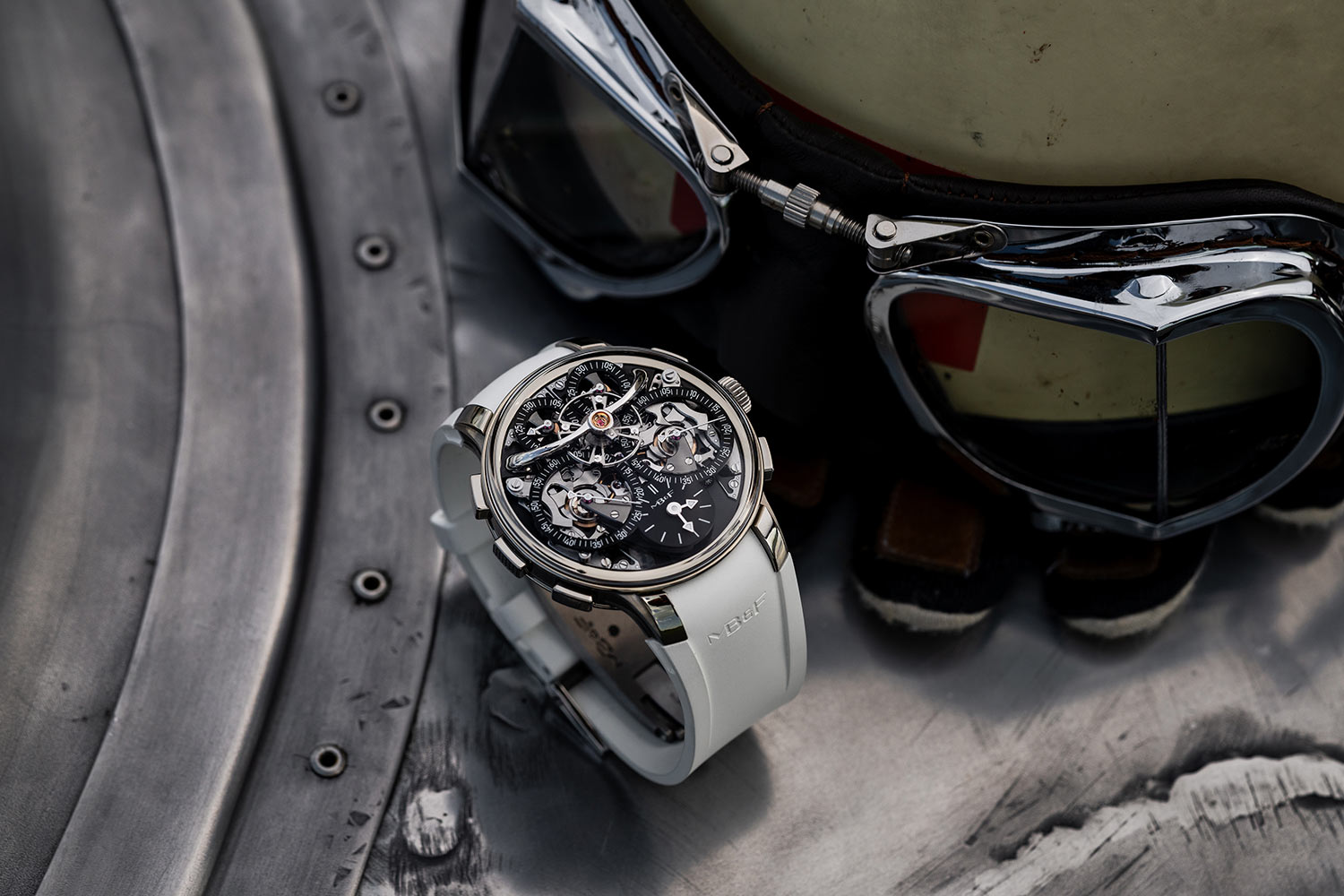 Conceived by one of the very earliest MB&F collaborators and Friends, Stephen McDonnell, LM Sequential EVO explodes the current limits of what we thought chronographs could do. Just like the 2015Legacy Machine Perpetual, the last major Stephen McDonnell movement for MB&F, LM Sequential EVO involved a back-to-the-drawing-board approach towards our most basic assumptions on chronograph construction.

However, there is a fifth pusher, located at the 9 o’clock position: the “Twinverter”. This pusher is the secret that elevates the functionality of the LM Sequential EVO beyond any existing chronograph wristwatch. It controls both chronograph systems, operating as a binary switch that inverts the current start/stop status of each chronograph. This means that if both chronograph displays happen to be stopped (at zero position or otherwise), pressing the Twinverter will cause both of them to start simultaneously. If they are both running, the Twinverter makes them stop. If one is running and the other is stopped, the Twinverter stops the one that is running and starts the one that is stopped.

Simultaneous mode is used for example in a race involving two competitors, starting simultaneously. The Twinverter allows to start both chronographs at exactly the same time, but the different endpoints can be easily recorded by pressing each chronograph’s individual start/stop pusher. To note, the durations of the events can exceed 60 seconds, which is the limit for the vast majority of split-second chronographs on the market.

Cumulative mode occurs frequently in the work environment, where you might want to know how much time you spend on two separate projects as you switch between them throughout the day. By starting one chronograph when you begin working on one task, and then using the Twinverter when you shift focus to the second task (switching again when you go back to the first), you can easily track the amount of time you cumulatively spend on each task. Another example of this usage is the timing of a chess match.

Sequential mode(or lap mode)has its greatest relevance in competitive sports, where it can be used to measure individual lap times. Starting one chronograph at the beginning of an event and using the Twinverter upon the completion of a lap instantly launches the second chronograph in order to time the next lap, while the first chronograph is stopped, allowing ample time for the timing result to be noted down. The stopped chronograph can then be reset to zero, ready to be relaunched with the Twinverter for the following lap. Thanks to its minutes’ totalisers, LM Sequential EVO can be used effectively in sporting events with average lap times of over a minute (which includes the vast majority of lap-racing sports).

Independent mode can be used for instance in the preparation of a meal, where different things need to be cooked for different periods of time, at different points in time. You would operate the two chronograph mechanisms via their respective pushers—for instance, starting one when you put your pasta into boiling water and starting the other when the vegetables go in the oven. In fact, this application of LM Sequential EVO comes in handy in all areas of personal productivity. At the gym, for example, when trying to optimise your physical workout routine, one chronograph can be set to time your entire session whilst the second is used to record your time at each station, or the downtime in between.

Most other high-concept chronographs that are designed to increase the uses of the chronograph go about it by tailoring the mechanism towards highly specific, sports-oriented situations. In comparison, LM Sequential EVO operates in every aspect of daily life, in contexts familiar to all of us. Its zirconium case, 80 metres of water resistance and internal “FlexRing” damping system give unprecedented resilience to a movement this complex. All this makes the “EVO” collection a natural home for MB&F’s first chronograph, reinforcing the identity set in place when the first EVO–the LM Perpetual EVO–was established in 2020: “not a watch for sports, a watch for life”.

After all, despite its mechanical profundity, LM Sequential EVO is easy to use, and more importantly, it is actually useful. You might even wonder why no one has done it before. When you think about it, it seems so intuitive; as straightforward as 1-2-3. One watch, with two chronograph mechanisms, that can be used in multiple ways.

Switching it up: more about the engine

The Twinverter, the innovative fifth chronograph pusher conceived by the brilliant mind of Stephen McDonnell, may seem like a completely novel idea—and in many ways it is. Those familiar with chronograph history, however, will recognise the roots of this concept in early chronograph systems.

The word chronograph has Greek etymological roots. The first part comes from χρόνος(chrónos), meaning time, as seen in words such as chronology and chronicle. The second part is derived from γρᾰ́φω(gráphō), meaning to write, to make a written record of something. Just as a phonograph describes a system of recorded sound and a photograph is recorded light, a chronograph gives us recorded time. In the early 19th century, chronographs were associated with horseracing, developed according to the necessity to precisely determine the timing results of such a fast-paced sport. These early chronographs used droplets of ink to mark timings on dials even as they continued to run, allowing specific timings to be preserved for the record (at least until the chronograph was stopped and the dial wiped clean for the next race).

Subsequent developments of chronograph apparatuses, also related to track events, included a lever, connected to multiple individual chronographs so that they could all be started simultaneously instead of having multiple timers operated separately(a sub-optimal system that inevitably incorporated small differences between the starting times of each).

When Maximilian Büsser spoke to Stephen McDonnellin 2016, raising the possibility of a follow-up to Legacy Machine Perpetual (2015), the response from Stephen was four words long: “I have an idea.” It was a response as cryptic as it was exciting, particularly if you knew the kind of ideas that came from the mind of Stephen McDonnell. That conversation with Max accelerated a train of thought that Stephen had been mulling over for some time—that most modern chronographs were unable to adequately perform the job they had been designed for.

The combined chronograph lever immediately suggested itself to him as a way to ensure that race events could be measured with maximum precision with a manually operated mechanical chronograph. Allowing the chronographs systems to be operated separately meant that different timings could be taken and preserved long enough for the results to be recorded.

From then on, the various solutions fell into place. Using two separate chronograph mechanisms linked to the same oscillator—an idea practically made for the Legacy Machine, with its central flying balance wheel—meant that timing errors due to tiny chronometric discrepancies between different timers would be eliminated.

Stephen McDonnell continued to refine his vision of the ideal chronograph, reconfiguring the chronograph vertical clutch to sit within the main gear train in order to eliminate the infamous flutter of the chronograph seconds hand without the need for an amplitude-draining friction spring. He incorporated internally jewelled chronograph clutch shafts that would make amplitude fluctuation between the active and inactive modes of the chronograph a thing of history.

The crowning touch to Stephen McDonnell’s ideal chronograph, augmenting the role played by the combined starting lever in historical chronograph systems, is the Twinverter concept. The ability to toggle instantly between chronograph operating modes directly opens up this age-old complication to be used in a variety of situations in modern daily life. It is the programming logic gate of mechanical watchmaking, a system that could have been devised only by the creator of the mechanical processor at the heart of Legacy Machine Perpetual.

The EVO evolves: more about the EVO collection

Legacy Machine Perpetual EVO was launched in 2020, introducing the EVO collection into the world of MB&F. Based on the established codes of the Legacy Machine collection, EVO placed wearability, robustness and versatility at the core of its identity.

Zirconium was used in the launch edition of the LM Perpetual EVO, and is now the debut case material for the LM Sequential EVO. It is a silvery-grey metal admired for its deep lustre, that is lighter than stainless steel and more durable than titanium. Coupled with these exceptional properties, its hypoallergenic and anti-microbial attributes make it ideal for an active lifestyle watch. Because zirconium is known to spontaneously ignite in powdered form, it can be highly dangerous to machine except under strict environmentally controlled conditions, explaining its rarity in the world of watchmaking.

A no-bezel case design emphasises the movement within, allowing the finely balanced and symmetrical work of Stephen McDonnell to be fully showcased. In LM Sequential EVO, the iconic sapphire-crystal dome characteristic of the LM collection underwent a complicated shift in geometry in order to accommodate the placement of the 3Hz (21,600vph) suspended balance in relation to the chronograph displays. Despite the final appearance of the dial crystal—forming a perfectly smooth arch—there are actually two subtle (and difficult to achieve) angles incorporated within the camber of the crystal in order to minimise the overall height of LM Sequential EVO when worn on the wrist. An integrated rubber strap, an essential EVO feature, makes for the smoothest wearing experience of any MB&F Machine ever.

Providing further comfort for the wearer (both on the wrist and in the mind), EVO utilises an annular dampener fitted between case and movement, providing shock protection along both vertical and lateral axes: the FlexRing. Machined from a single block of stainless steel, the dampener imparts exceptional robustness to the movement within, ensuring that EVO remains a watch that can and will follow you through all aspects of an active life.