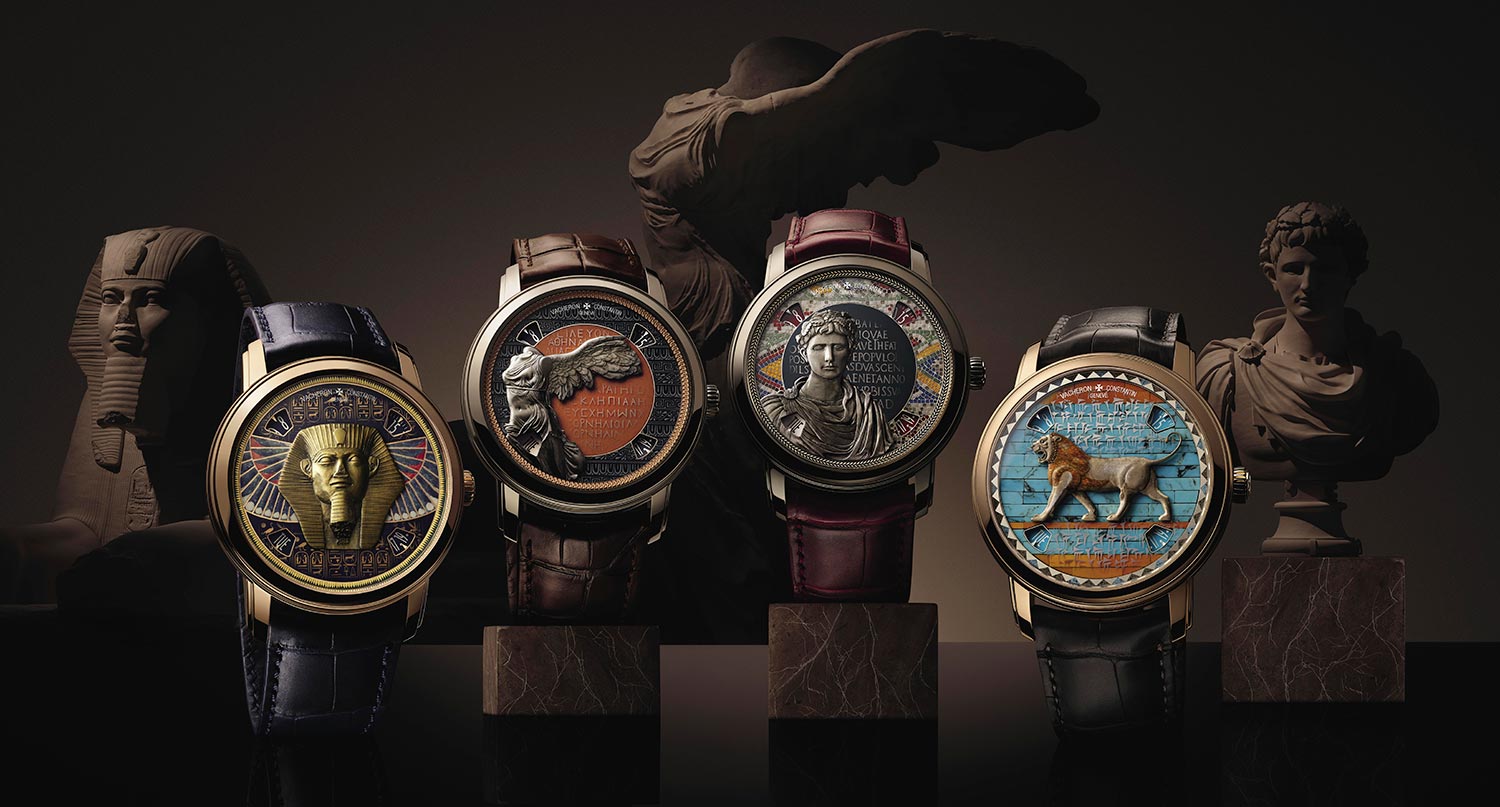 The Persian Empire of Darius the Great, the golden age of Ancient Egypt, the Hellenistic period of Ancient Greece and the rise to power of Augustus, the first Roman emperor, are the historical anchor points of Vacheron Constantin’s new Métiers d’Art watch series. As part of the partnership with the Louvre initiated in 2019 and following intense collaboration with its curators and historians, the Maison has developed a series of four timepieces based on the museum’s ancient collections. True symbols of each era, these artistic masterpieces are at the centre of an exceptional watchmaking show staged by skilled craft makers.

Vacheron Constantin’s Métiers d’Art collection is a unique opportunity to travel through time and space thanks to the talents of its master artisans. It is an opportunity to discover – or revisit – certain historical chapters or artistic and cultural symbols of our civilisations. From this perspective, the partnership initiated with the Louvre in 2019 offers an exceptional field of inspiration. In close collaboration with the museum’s teams, Vacheron Constantin’s designers and developers, therefore, undertook to create a new series of Métiers d’Art watches directly inspired by emblematic masterpieces of the Louvre.

Expressed across four eras, the main theme originated in the museum’s incredible collection of antiquities: the Persian Empire under Darius the Great; the Egypt of the pharaohs from the time of the Middle Kingdom; the Hellenistic period in Greece; and the birth of the Roman Empire with the advent of Augustus. Each of these great civilisations is thus represented by a major artistic work drawn from some of the Louvre’s masterpieces. The craft project involved a real challenge for craft makers that required reproducing their expressive strength on a less than 40 mm-diameter dial featuring ornamentation inspired by the decorative arts of the corresponding period, embellished with written elements. The choice of techniques, the rare talents required to implement them, as well as the original composition of these timepieces converge to offer a fascinating watchmaking spectacle, commensurate with these great moments in history.

By joining forces with the Louvre in 2019, Vacheron Constantin initiated a veritable artistic and cultural partnership, in perfect keeping with its commitment to the celebration of beauty. This alliance echoes the respective heritages of the two institutions and the importance they attach to history, culture and heritage. Vacheron Constantin, founded in 1755, and the Louvre, which opened its doors to the public some 40 years later, in 1793, share a concern for archiving, conservation and restoration, with the promise of perpetuating the related arts and crafts. This shared attachment to the splendours of the past and the transmission of knowledge has already paved the way for several joint initiatives by the two partners. Vacheron Constantin has supported the restoration of the clock named La Création du Monde, a masterpiece of 18th century precision horology presented to King Louis XV in 1754. The Maison also participated in a recent online Louvre auction by offering a single-piece edition Les Cabinotiers, whose dial was to reproduce in enamel an artwork kept in the museum and selected by its buyer. Another achievement was the discovery of the art workshops of the two institutions through a series of videos illustrating a parallel between the work of their respective master artisans. This collaboration has been further intensified with these new additions to the Vacheron Constantin Métiers d’Art collection. From the selection of themes to the choice of representative works, from iconographic research to historical documentation and proposals for contextual texts, Vacheron Constantin’s designers and creators have been able to count on the close collaboration of the Louvre’s teams in defining the craft techniques to be used to pay due homage to the masterpieces. These exchanges are part of the logic of sharing that unites the two institutions, in terms of best practices not only with regard to conservation, archiving and restoration, but also those of their craft makers. Since 2019, the cordial relations between Vacheron Constantin and the Louvre, experienced behind the scenes by both partners, have given rise to exceptional projects.

A calibre dedicated to artistry

To power these Métiers d’Art Tribute to great civilisations watches, Vacheron Constantin has chosen its self-winding Manufacture Calibre 2460 G4/2, which features four discs indicating the hours, minutes, days and dates. The apertures for reading the time and calendar indications, symmetrically positioned around the dial periphery, thus leave a vast field of expression for the artisans. No hands disturb the view of these miniature masterpieces. On the back of the movement, beating at a rate of 4 Hz (28,800 vibrations per hour) and comprising 237 components, the oscillating weight has also received special attention. It features a depiction – based on an 18th century lithograph – of the east facade of the Louvre and its magnificent colonnade inspired by the work of Louis Le Vau and Claude Perrault, based on an 18th century etching. The matrix of the design was hand-sculpted and then used to stamp the twenty oscillating weights composing the series.

The dial and its frieze are thus composed of several decorative elements taken from various works of the same period as the one depicted in the applique. To create these splendid backgrounds, Vacheron Constantin has opted for different techniques implemented by various craft makers.