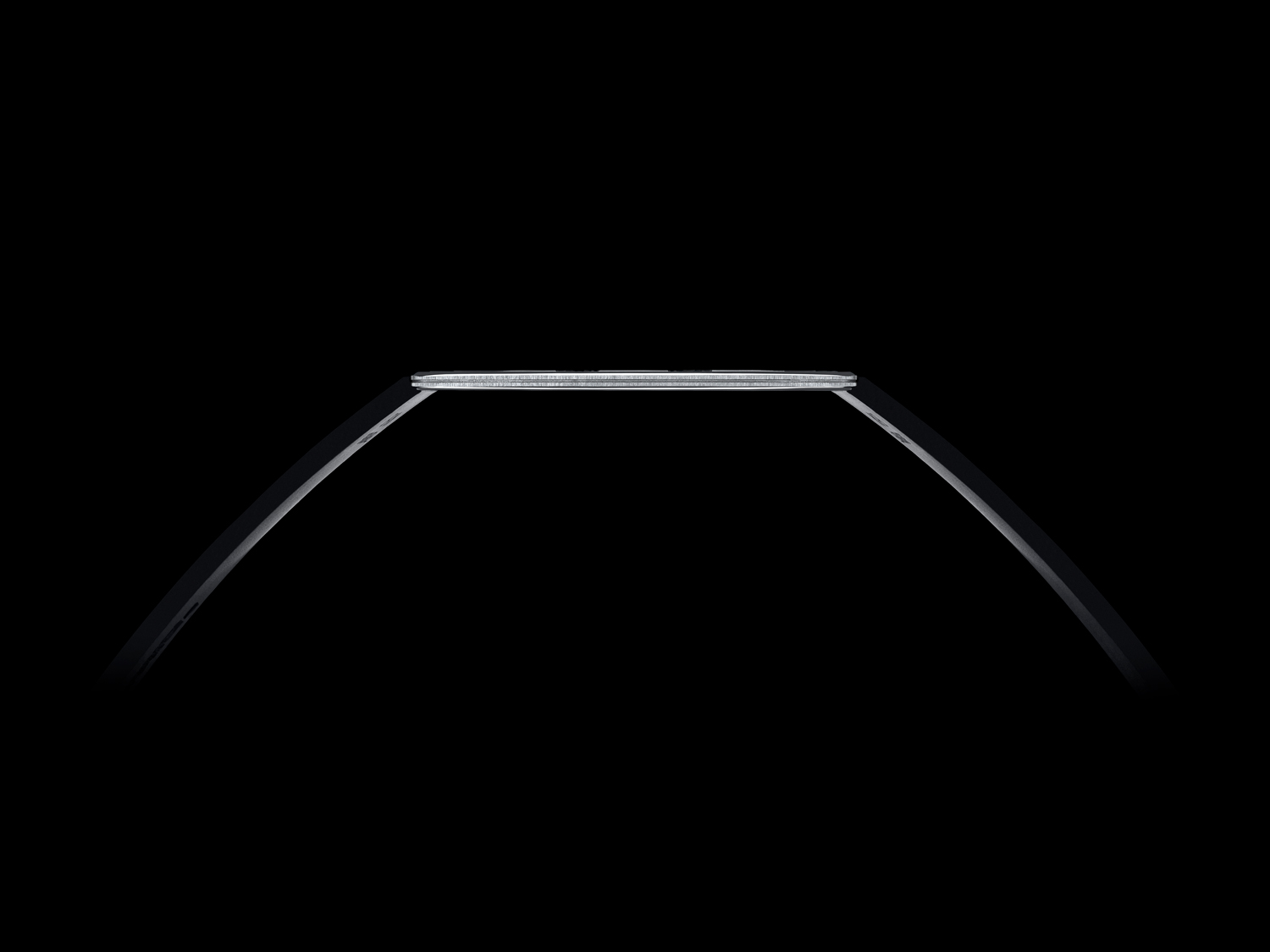 RM UP-01 FERRARI FIGHTING FOR THE LAST HUNDREDTHS

Sporting mechanisms that are as elegant as they are immediately recognisable. An identical obsession with excellence, precision, reliability and innovation. A common goal of uncompromising performance. In 2021, Ferrari and Richard Mille, driven by their shared quest for perfection, joined forces to create a long-term partnership. Richard Mille celebrates this budding relationship with the creation of an exceptional ultra-flat timepiece, the RM UP-01 Ferrari.

Breaking with the brand’s established stylistic codes, but faithful to its identity and spirit, this model once again rolls back the limits of the possible by taking up the ultra-flat challenge.

At just 1.75mm thick, the RM UP-01 Ferrari constitutes a triumph of technical prowess and exemplifies a new approach to watch mechanics in which technicity more than ever dictates aesthetics.

A model resulting from many years’ work, dozens of prototypes and more than 6,000 hours of development and laboratory testing. Richard Mille was determined to retain a traditional architecture in which the movement is assembled within the case, rather than a construction in which the caseback doubles as a baseplate, in order to ensure total shock resistance under any circumstances.

“For such a project, it was necessary to set aside all the knowledge we had amassed over years of practice, and every conceivable standard of watchmaking,” explains Julien Boillat, Technical Director for Cases at Richard Mille. “This is precisely what we did throughout our collaboration with the laboratories of Audemars Piguet Le Locle. Shaving off those last hundredths of millimetres of depth was an extremely demanding and lengthy process.”

The collaboration between Richard Mille and the Ferrari teams, most visibly expressed in the choice of materials and execution of the watch, also precisely lent the project the competitive spirit that is essential in the most exhilarating adventures. The RM UP-01 Ferrari is an allusive piece to Ferrari’s values, developing sporting mechanisms that are as elegant as they are immediately recognisable. Their models make no concessions and frequently contradict current trends to create new aesthetical codes. The RM UP-01 Ferrari bears witness to this partnership of the best know-how these two iconic brands have to offer in the combination of their ideas, understanding, respective developments and shared values.

Meeting the challenge of an ultra-flat watch, precluded a traditional movement with superimposed gears and hands. Richard Mille, therefore, opted to distribute what could not be stacked over a broader surface area by creating a perfect symbiosis between the movement and case, each ensuring the necessary rigidity of the other. The RM UP-01 manual-winding movement with hours, minutes and function selector – capable of withstanding accelerations of more than 5,000g’s – thus boasts a thickness of 1.18mm, a weight of 2.82 grams, and a power reserve of 45 hours.

To ensure optimal functioning of the going train, the baseplate and skeletonised bridges are crafted of grade five titanium, guaranteeing perfect flatness without compromising strength. The patented extra flat barrel is fitted with an extraordinarily fine hairspring and the architecture of the escapement was entirely redesigned. To reduce depth, the small plate of the balance and dart (guard pin) – two parts that prevent the anchor from slipping back during the free phase of the balance wheel’s movement – were eliminated. The new ultra-flat escapement, also patented, replaced these ‘anti-reversal’ elements with an elongated fork with new horns. Likewise, the index was set aside in favour of a variable-inertia balance crafted in titanium, whose six weights allow for fine-tuned calibration of the regulating organ. To deliver a watch this thin, it was also necessary to rethink the winding mechanism and eliminate the winding stem, whose minimum diameter of 1.5mm precluded its inclusion in such a slim watch. In its place, the two crowns, one for function selection, and the other to utilise the selected function, have both been integrated into the case as movement wheels.

“Even in the realm of extreme flatness, we were determined to make a watch that met the same validation requirements as all our other models. In this quest for absolute flatness, we had to offer a watch that, far from being a ‘concept watch’, was up to the task of following a user’s daily life, whatever the circumstances,” concluded Salvador Arbona, Technical Director for Movements at Richard Mille.

As a material for the case – just 1.75mm in thickness and water resistant to 10 metres – titanium was chosen for the advantages it offers in combining lightness and laboratory-tested resistance. The two sapphire crystals, one over the time indicators, whose hands are directly affixed to the wheels, the other positioned over the regulator (balance wheel-spring assembly) to showcase the movement’s operation, were also reduced in a thickness to two-tenths of a millimetre with a diameter calculated to ensure their resistance during testing phases. The narrow tolerance range and extreme slenderness of each part required the focus to be particularly meticulous and checked at almost every stage of machining. It was therefore natural that the decision to produce and machine the case in-house in Richard Mille’s own movement department was the logical step to take for the RM UP-01 Ferrari.

Like the prestigious Italian automotive legend – and consistent with the standards of the Richard Mille manufacture, thanks to its extreme lightness, tonneau shape, spline screws, skeletonised bridges and level of finishing – the 150 limited-edition timepieces in the RM UP-01 Ferrari series combine innovation with performance, strength and aesthetics.

A work of surpassing prowess that meets the brand’s every expectation, ready to be worn under any circumstances.